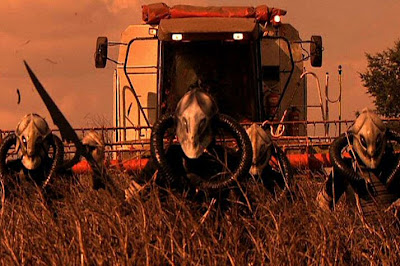 After the long effects of food poisoning President Obama was led by Hairy to share a room with his youngest Bo – Bo. Cosmo the ever present protective friend had come to love the new found friend in this new life form that was standing in front of him. Obama reached down while sitting on the spare space-spider-netting that was hung between two beams in the room. Obama thought to himself…well, as for comfort there is something to be desired, but Harries a great host.

So Hairy came in to little Bo – Bo’s room carrying a suitcase that he pressed a button on and it became a small walk in closet. It had an electronic touch pad on it. What’s that Hairy? President Obama looked puzzled, and was staring at the bizarre looking closet. Oh, that’s an automatic dresser. On our Planet and in space our fashions change from day-to-day, so our scientists came up with an answer to this expensive problem with the automatic-dresser. How does it work Hairy? Well you put in your sizes, of shirts and pants…the colors that you prefer and your style preferences. Let me show you – then Hairy began to teach Obama how to use his clothes maker-dresser. So I press this button and it gets me the style and color and puff it appears? Yes it does…would you like me to show you again? No I think it registers can I type in pajamas and slippers? But of course you can. Did you like that? That was my T.V. taught lingo, we love watching earth T.V. up here. I bet you’d like to go to sleep? Good night and Hairy went over to Bo – Bo and kissed him good night, and gave his loving Cosmo a pat on the head before leaving the room.

Meanwhile a galaxy away Harries arch-enemy-Carlsbad was sitting at his desk covered in smashed Plutonium-Pearls planning an evil-diabolical plan to kidnap President Obama, and turn the crazy-clone evil while laughing; blah, ha, ha, ha! He rubbed his 3 fingered alien hands together in true evil alien style.

Chuck had been lovingly polishing his space alien counter-tops, in his Pre-made Alien pad. He was really enjoying himself and was listening to his tunes on his MP3 player. He was polishing and dancing, while reloading his bong every now and again. Then all of a sudden…he heard; come out with your hands up! He opened his front door to see 20 men in black-uniforms, standing in front of him – pointing military assault rifles at him. Chuck asked with a stoned-glazed-look; “what do you want?” Sir! Move your hands away from your sides, raise them above your head...slowly, and then he slowly walked towards the car. As Chuck walked towards the car, 20 FBI agents ran inside his house with boxes and gloves. Do I have the right to ask - what you guys are doing? Yes and no, we’ve had an incident happen at the White House, involving a space alien, and we need to talk to you about that. So the agent that had been talking to Chuck escorted him to the car, and drove Chuck back to the department to be interrogated to get necessary information that they wanted to explain the alien poop on the white house floor.

As Obama feel asleep listening to little Bo – Bo making the cutest baby sleeping noises, he felt relaxed and contented, which was something he hadn’t felt since taking on the most stressful job of his life. People, if it weren’t for the fact that I have to tolerate and deal with so many different types of annoying people…being President would be the best thing to be. The grass is always greener on the other side, he thought to himself and then he fell asleep. Right as he fell asleep little Bo – Bo let lose one of the loudest baby farts, that Obama had ever heard, he smiled and fell asleep.

Carlsbad beamed himself down to the White House and was standing over the Obama clone as he slept; he took out a hypodermic needle, and gave him a shot to make him stay asleep for the surgery. Then he gave the first lady a nerve-gas-sleeping-aid to keep her asleep as he worked his evil space alien magic. He got out his traveling operating tools, which were in his black-space-operating-bag, he put them on the table beside the clone, and with a miniature shaver shaved a tiny part at the back of the clone’s head, to implant a chip in his cloned-cyborg brain. He then took out his tiny-drill, and drilled threw his skull-cap. He began to implant the chip that would turn the clone evil, all that was left for him to do, was to get the automatic-healer that he never left home without…it was the neatest thing he owned. He had purchased it from Evil Aliens Are Us. They always had the latest and greatest things to help any evil alien accomplish even the most complicated of evil plans. So he grabbed his instant healer, and waved it over the cut on the clones head, and a green light shot out onto the fresh wound, a second later the wound was healed. Last but not least he had to cover the patch of missing hair with a tiny amount of fake hair that would last any shampooing. Finally, he was finished, and all that was left to do, was to activate the evil chip, a chip he invented himself, that would instantly turn the Obama clone into a doer of evil. So he got out his sensor for the chip, he pushed the green button to activate the chip; grabbed his black bag, and got out his space alien hover-craft-keys, pressed the red-button, and was transported back onto the ship.
To be continued…

HELP A COLLEGE STUDENT/SELF PUBLISHER
Posted by Unknown at 4:31 PM