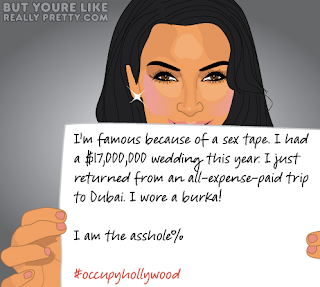 Alright, I had something happen to me while running threw the mall yesterday for makeup...now, I'm not CATTY at all, and I have to deal with the no-nothing chicks in the Valley, that live in California. Let me tell you how these chicks act! Usually these brain-dead chicks, can't, and won't confront a single-girl by themselves, they will talk-shit just loudly enough to their fat girlfriends, so you or I will be able to hear them. Now these types of Catty Women, hang out with uglier women then themselves, so that they can A. feel better about themselves, and B. get all the attention, while hanging around a uglier-fatter-woman, or  C. they really do have an inferiority-complex, in regards to women whom look as good or better then they do. But lets not leave out option D. they are just Bitches!

These are the types of bitches that make other women life's completely-miserable! I should know, they make mine generally very uncomfortable. So, I went to the mall, because, I'm a woman, and I needed make-up that day. I usually shop at a higher quality make-up stores, like Sophora or Macy's, because I don't like buying cheap over the counter-make-up, which has to be bought, over and over again. I do believe; that putting your best foot forward, in business, and when first meeting someone, is very important. So yes, of course, I want to make a good impression with people...so I will choose to buy better make-up, which actually lasts longer, then the cheap shit, which you could by at any Wall Mart! Although any three items being purchased, from that type of a make-up-shop, can run you anywhere; from $50 dollars or higher, but the cost is totally worth it! Due to the fact, that the make up is such a good quality, and lasts so long. Anyway, I was headed out the door, when Mrs. Catty, supper-upper-bitch was walking behind me; with her overweight-girlfriend saying, just loudly enough to be heard by me; "oh my God! If you get your hair cut like that! I swear! I'm going to stop talking to you!" Now this dumb-bitch, didn't know, that I let my coarse hair air-dry, and then I use a flat Iron to straighten it...I can't have it looking perfect, while it's air-drying! So I turned around and yelled; "it's drying bitch! What the f**k do you want me to do?" It's funny to me, but, chicks like these; can never say anything about you, to your face! They always will talk just loudly enough, to be heard by you, and they usually will never say it out-loud by themselves directly to you. I call that act by chicks like these; the High School bully mentality! Although, I know bully's can get their asses kicked, and I would have jumped her ass; if she wouldn't have been in the mall...so all I could do was yell at her!

I absolutely hate, most, but not all Valley Chicks, because of just this type of High-School-bully-mentality... they where bully's in High School, and when the c**ts get out of High School; they take that messed up mentality to our malls, and to our streets in the Valley. That type of "bully" mentality sucks...1. because, I didn't know her or her friend, and 2. because, I hadn't done anything; except being in the wrong place at the wrong time, which lead to a verbal assault, upon my person by this c**t! It's not just the chicks in the Valley who act this way, it's a lot of the men too...my Grandfather called people like these, and excuse my political incorrectness here; "n*ger rich!"  That term is meant for people of any race...that believe that they are rich, and spend all there money on "high quality items," or people whom are living beyond their means, while trying to attain a life-style, that they simply can not afford to have; while acting like they are better then everyone else around them! It sucks! There are thousands of people living like this in the Valley, and they are "upper-irritating," to have to deal with on the daily!

Now as if that isn't enough in and of itself, add the High-School-bully-mentality drama to the mix, and that's when living in the Valley, truly starts to "suck!"  Today is Sunday, so I decided, to walk to a farmer market, type of market, on Ventura Blvd and Topanga Blvd today, for my Sunday weekly exercise. But before that, I decided to go to Starbucks. While there I attempted to say Hi to an Asian woman, whom was so High- School-drama and stuck-up, that she couldn't even be bothered to say Hi back. Now this type of attitude, is really beyond my understanding; since I have worked in Beverly Hills, and when I said Hi to people there; people actually said Hi back. It's not just the women in the Valley who totally suck, like I said it's also the men; with two guys in that Starbucks, with questionable sexuality's, standing in line whom where talking about the authenticity of a woman's boobs, who was in hearing distance. Now I thought they where being rude as f**k...I could be wrong, but I'm probably not.

Maybe it's just me, but being friendly, is better then being rude and obnoxious, to people which have never met before, but its all about that stupid High School bully mentality in the Valley in California! It's something that I hate so much while having to live here. I desperately want to get the hell out of the valley, because just like the song from Nikki Six "No One Want to Die In Van Nuys," I really don't want to live around the obnoxious N**er Rich people here, whom are driving their rented sedans and S.U.V's for the rest of my life. All I have to say is that they are actually worse, then the yuppies from the 80's, and these types of people are branching out all over the Valley in California. People whom own nothing but Named Brand everything; from shoes, to clothes, to pants, to glasses, whom only want the shear pleasure of flaunting themselves and everything they think they have, in everyone's faces. While simply being to "good" to act politely enough to say Hi..."who the hell, wants to be around people like that?"

Everyone here is trying to live like they are Kim Kardasian...which to me; is retarded! Even though, I don't think that she has a lot of her own-style...at least her style, is her own!  I'm just so completly over everything, and everybody in the Valley...plus, here they have groups of upper-yuppies, who do something called; "walking the mall?" These people are so lazy here in the Valley, that they would rather walk-the-mall, then go outside, and get something called "fresh-air." One day, I hope, that I can escape the Valley-upper-High-School-drama-bully's here, because, I'm actually a very kind hearted person, and that type of shit, does affect me negatively. I just escaped being in a relationship with a man, whom prided himself, on that type behavior, while hanging out with other women whom acted like the "High-School-drama-bully's.". I really would love to find a nice place to live; where the mall mentality and whom has what, isn't such a big deal...will I ever find it? Probably not! I can live to hope that I can; can't I?
Posted by Unknown at 3:32 PM