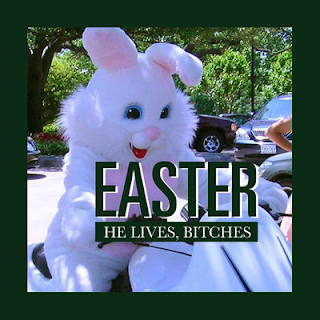 Tomorrow is crucifixion day, which to me is on the same path a Turkey day, both the Turkey and Jesus sacrificed themselves for the betterment of humanity.

I would love to say I agree with giving a day of worship to the crucifixion of any man...but I can not! To me murder is murder, and to all the victims who have been sentenced to death for crimes that they did not commit, or because they where murdered during the Holocaust: screams "wrong" to me!. I believe that worshiping anyone's brutal-murder is a crime within and of itself. Under the see no evil, hear no evil, think no evil thoughts, that  most of us where taught during early childhood.

I bet a lot of Christians will be watching the Passion movie this Easter...I believe that the other half of my race, has been persecuted enough, and that Mel Gibson, did not "think" before making such a violent movie.

How many times in that movie does poor Jesus need to be killed so that Christians will realize: "what I'm watching is upsetting, and disturbing me, and that no human being, needs to be beaten to a bloody pulp for any reason!" We have all been passed down this Christian dogma, which I have always found to be very Macabre and bizarre.

Now not every Christian church, is into hanging Jesus on a cross, like so many denominations of Christianity seems to be. Some denominations say; "let us remember the man for his ACTS of kindness and compassion." Lets not forget who, and what, Jesus actually represented; he did not represent, and was not a victim! He was what every man should work to become, he gave us the tools to better our lives, that's really who Jesus was.

I really don't believe, after reading so much about Jesus, that he would want the movie the Passion to be shown. Why? Because, it promotes hate, and violence, against the people that Jesus loved, which was the Jewish race. Knowing what I know about God, I prey for Jesus, God knows all, and knew that the religion, that Jesus represented would eventually be spread by word of mouth, threw a man named Paul...an act that would bring about the Inquisition along with the death of millions.  Along with the replaying of the Passion, which did bring about the hate and murderous acts during the Holocaust. I am very gifted and have visions; Jesus sits to the right of God, but not in the thrown that he wanted to sit on. He sits in a wooden thrown with the words; "king of the Jews!" His own race, walks by his thrown laughing at him and pointing, while saying; "King of the Jews?". Something that saddens me beyond all words. So I prey for Jesus, and not too him, I have tried threw-out my life; time and time again, to emulate the mans words into action. Although his religion did get millions of my people murdered, he is still a brother to me, and to the Jewish race. Jesus must be forgiven by the same race, that had condemned him to death, choosing him to die, over a real murderer.

I do not judge him or anyone, and neither will I judge Jesus a man, who may be related to my own Jewish family in some way. He may not have died an actual physical death, which would be alright by me, as my Grandmother said; "he had two kids and lived to be an old man." I have neither hatred or any-type of misunderstanding, of what Jesus the man had wanted his people to become...he wanted them to become better, and more accepting people. A people who would put away their social-differences. He wanted to stop that social divide, and bridge the gap that the Jewish people had back then amongst each other, and still have amongst each other today. So in one way he failed, because even though the Israelite's have gone threw so much, they are still morally, and socially divided as a religious group.

I told one Jewish man who believed himself to be a scholar...that in heaven all the Jewish race is together, and he screamed at me; "that is impossible! You have no idea what you are talking about!" He went on to say, that there is two different groups of Israelite's, which have been fighting for century's, and that they would never come together, or even want to be around each other, on earth or in heaven." My answer to him was; "look it was a vision, if you have a problem with what I've seen regarding Heaven in my vision - then take it up with God!"

Do I want to see, what I believe Jesus wanted to see amongst his people? Which was the actual brotherhood of his race, where everyone is included, and certain members are not excluded in Judaism. Where nobody is excluded based on, which side they may be on, who their mothers might have been and so on...yes I would! I believe that's all that Jesus really wanted...I don't believe, that he was looking out for any gentile at that time, when he came out and preached to the Israelite's at that time.

Paul did something good by spreading what he called; "the good news." He promoted something which would eventually bring about a certain kind of community amongst millions of people, and selfless help, for thousands of poverty stricken people.

Although the Christian religion has brought about millions of peoples death's, even some of the brightest thinkers that where ever born, where killed because of Christianity. Christianity has also helped millions of people as well. Personally the only problem I have with Christianity, is the sacrifice of self; no one, should ever have to sacrifice themselves to prove anything! Unless it was during an act of valor, to save someones life, from the mortar of a grenade. Crucifixion....I will never really be able to understand, and I don't believe, that it really brings anything positive to the table, regarding spirituality.

I still want to wish all my Christian readers a happy Easter, but I believe we should all say a prayer for Jesus...because, when it comes to God, you can never be careful enough.

Seriously that's fucked up they killed 500 people with a taser and some of them were even in jail seriously how many fuckin ppl have to die b4 they take tasers off the shelf thats bullshit especially if nothing happen to the cops like in this situation above. this police officer should be in jail for attempted murder just because a women was running on an arrest for a hit and run WTF KIND OF SHIT IS THAT!!!!