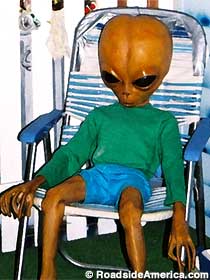 One afternoon Chuck was walking out back, then he decided to actually get his lagging butt out of the house and go out-back, after playing video games for hours. He almost tripped on a busted cement stair that he was too cheap to fix. Wow! I almost busted my ass on that stair case, God why haven’t I gotten around to fixing that thing? There was a loud sonic boom, he looked up in amazement; “what the hell was that!” He turned to look towards the sound of car alarms simultaneously going-off. What the hell is going on? He decided to start running towards the street. At first it was a slow run, but when he saw all the people gathering outside, his running became faster. He ran around the adjacent corner on Pact Street. It was a well-known street, where people always met to have coffee and go to the movies.

When he approached the corner there was a giant hole in the ground where the meteor had struck, and there was steam coming out of the giant hole it left.

Chuck was thinking to himself; God come on people, haven’t you seen those sci-fi movies where the monster comes out of the hole…or invasion of the body snatchers? Geese people, can you all just wise the hell up! Then he recognized Margret, she was a childhood friend, someone he had known all of his life and gone to grade school with. Oh hey Margret, what the hell is going on? Oh hey Chuck, I’m not sure what’s going on? All I know, is I was doing dishes and heard this huge bang, and then everyone’s car alarm went off! All of the noises made all six of my pit bulls go crazy! Oh so your still adopting those dogs out? Nice Margret. Yea Chuck, I still have a heart for those misunderstood creatures. Margaret did anyone call the cops…? Yea, I believe everyone did, and they should be here any minute.

Then out of nowhere there was a loud hissing noise, everyone stopped and looked at each other, especially the mothers who were holding their baby’s.

A pregnant lady screamed; Oh my God! Everyone RUN! One woman screamed who was holding a baby. Run! So Chuck and Margret started running. As they started to run, a 6 legged alien that appeared to look like a giant monster, with long arms, with a light at the end of two - put this light that was on the end of its arm up to the poor man’s face. He was in a trance from fear, and the monster/aliens light. Chuck and Margret watched as the alien began to suck the life force out of the man’s body. They watched as the man grew old in seconds right in front of them, he started to decay, and then right as the last bit of life was sucked from his body, a wind blew and he turned to dust and blew away.

Oh my God Margret, what the hell are we going to do? All I wanted to do tonight was check out the moon and the stars to get my sorry ass out of the house, and now this shit. Hey I’m not prepared for this! All bitching aside Chuck, then all of a sudden another sonic boom happened…then a meteor hit one of the houses. Chuck and Margret turned around to look at whose house it hit. Mother Merry of Christ - that’s my house, that the mother of all meteors just hit! Then Chuck put his hands to his face while moaning. Chuck do you have house insurance? He looked up from his hands, and said with his watering eyes; “we're being attacked by meteors and aliens, and you’re asking me if I have home owners insurance?" Well if you did Chuck, that would be a positive right? Yea, I guess, if we don’t get eaten or taken over by soul sucking aliens?

They both looked as they stood there watching Chucks house burn…a ship appeared hovering over the top of the what was left of Chucks destroyed house that was currently on fire. Petrified from fear Margret and Chuck just stood there, they watched helplessly as an alien ship was slowly shifting gears and floating over Chuck’s front yard. They both stood there shaking, looking at each other, petrified. Then there was a loud sound of a door opening…the silver door opened, and to both of their amazements, a man who resembled Monty Python stepped off the ship, walked down the stairs of the silver ship…walked up to both Chuck and Margret very calmly and said in an English accent; “God! Really sorry about this, my 15-yr-old hit the eject button with her purse by accident and sent that monster which is her science project, in a meteor to Earth.”

Hey look outer space man….do you plan of fixing my house or what? Excuse me what’s you name? the alien asked Chuck. My names Chuck! The Earth man whose house you destroyed…hey, I had a lot of really great shit in that house! How are you going to fix this Space Man? Well Chuck, first off my names not Space man…its, and he gave a really hi pitched squeal. Hey space man could you give me an English translation of that? Excuse me it’s Hairy. As Chuck stood there he was thinking; my house has been destroyed and gone down in burning flames, by a space alien named Hairy? Could this night be any more random?

Meanwhile….the giant soul sucking teenage-alien-science-project was running the streets looking for more victims. It found one elderly lady who was crossing the street with her walker; she was talking to herself saying: "will someone take me home?" The alien monster came up to her, and was about to start sucking her life force from her body, with his giant arm with the light at the end of it, when…Hairy ran up the space ships stairs, grabbed his giant monster/alien science project killing ray gun. Excuse me Chuck…but we’ll talk more about fixing your house, after I kill this mother!
Hairy barely reached the old-lady with dementia in time; he came up right behind her, and with his mind levitated her out of the monsters way, and onto someones front yard.

Then Hairy took his ray gun and pulled the trigger…a blast of light came from that gun, and shot the alien, but before the alien disintegrated, it  farted something that was heard for miles. Then Hairy put the gun to his side, ran back to his ship and said to Chuck; I understand you want your house back. Well this is what I’m going to do for you; I’m going to give you my pre-made house, a house that I had just purchased from Alien-homes-installed. I'm doing this for you, because you’ve been such a good sport about everything Chuck. Margret stood there in disbelieve…thinking to herself Chuck just hit the lotto. How cool is this? Lucky S.O.B. his house differently needed to be upgrade! Well good for him. So Hairy got into his silver space ship and hovered over Chuck’s house, and a beam of light shot down on Chucks old house, and that beam made his house disappear. After that Hairy s silver alien home appeared in the place of Chucks burning house. Hairy opened the hatch and threw the keys to chucks new alien pad at him and said; I've got to jet, the Misses likes me to be home by dinner for the kids! Chuck and Margaret stood there, watching Hairy's space ship disappear at the speed of light and then Hairy and his space ship were gone. Hey Margret, lets check out my new Alien space pad...