Is Gay Mariage Going To Mess Up America? 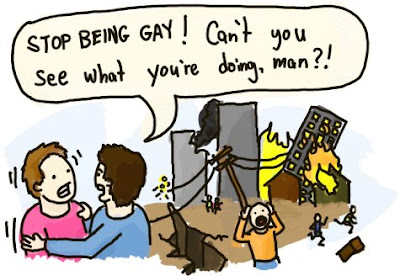 Today, I'm going discuss, the super taboo subject of "Gay Marriage." Yea your probably all asking me why did I have to chose this topic to discus. Well since I'm bi-sexual and have lived with two women, I can actually write about this topic...without sounding like a hypocrite.

My first off colored question about gay marriage is; "do you think, since our society is so accepting of Gays, that more people will turn to a gay life style, because being gay has become so accepted?"

I'll give you my answer, to my own question:

I grew up in the 80's, and the whole "gay guy thing" was really taking off. I saw guys kissing at a dance club, before I had ever kissed one myself. So it was odd...I always had this nagging question in my mind. If guys loved themselves so much, what did they need us (meaning women) for? I know, that wasn't the answer...so here it goes; I really believe, that the inclination to like the same sex, really has to be there in the first place, to want to experience being gay, or living in that type of life style. I don't think non-gay people, are going to wake up one day saying to themselves; I had better get out there and start searching for someone of the same sex to marry today?

Conservatives in this country are really worried, about what gay people are doing...why conservatives are feeling that way; I don't have an idea to why they're so against a group of people, most will never bother to meet? I really don't believe that most gay people, are going out of their way to turn straight people gay...that's also a right-winged believe. I believe that you should be allowed to spend the rest of your life with "whoever" you love. Finding and keeping love, with anyone these days, is really hard. You may only find love once in your entire life...I mean real love! I'm not talking about the pretenders, who will tell you, they love you all night and day, only to leave you, as soon as they think someone better has come along.

If anyone finds that in the same sex...the forever happily ever after type of love. Then who are you and who am I, to tell them that they can't be happy for the rest of their lives. It's their lives...so do you really think God doesn't have enough space in his heart for gay people? I only have a problem with the gay people, who get with straight people, to have children, or to try to be straight person pretenders to the world. An act which destroys millions of straight people world wide. I love gay people, because they are honest enough, to be who they are...I for one, won't tell anyone that they don't deserve to be happy. So I support Gay's and their rights to serve in the Military and to marry each other. Our society by embracing gays, is accepting a reality of the human existence, there always has been gays, and there always will be gays...we as a society can no longer wish them back into the closet. We must embrace them...to become what the United States should be; "TOLERANT!"