Silvia and the Buzzard II 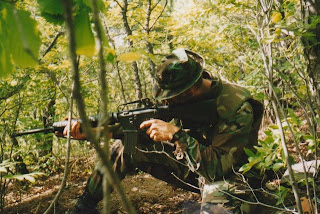 After her bath Sylvia felt better, if only for a little while. Today was the day, she was going to meet up with Christian. She had been thinking about him all week and couldn't wait to see him. The moment had finally arrived. So she went to a Vegan place to hang out, while she waited for their secret moment. She wanted him needed him, had to have him. Mr. Buzzard was still Mr. Buzzard…an empty shell of a man she used to love, nothing would ever change that. If it hadn’t been for the war he still be normal. She went to her closet to pick out her nicest and sexiest dress…something to impress, she needed to, wanted to impress him. Nothing she ever did for Mr. Buzzard was enough, no matter what military command was given to her, he never appreciated her submission to his demands.

All he wanted was more control of her life. Her relationship with Mr. Buzzard wasn’t one of any type of mutual respect. Where two people really loved and respected each other, it was a relationship of control. Him controlling her, and she hated him for it. She picked up her Hello Kitty key chain and walked out to her car, opened the door and stepped in, started the ignition and drove away.

Now Silvia was driving down Christians street, she was looking at the wilting trees as she went, was it an omen, did the dying trees mean something more…there was still time to turn back. She needed Christian to take away the pain she lived with on a daily basses. The pain that was inflicted by a sick man, who wouldn’t go to therapy like the military hospital had told him too, he never listened to the Doctors who tried helping him. It was sad, she needed normalcy, and that was something she would never find or have if she stayed with Mr. Buzzard…those vows. Why had she taken them? Finally she arrived at Christians condo complex, that complex always made her smile with its phony little ponds, it looked like part of Disney world.

Nothing in it was real, it reminded her of Christian nothing about his life was real either. Except he was dirty and she needed, wanted and had to have a passionate sweaty situation in her life. Something that was void with Mr. Buzzard, he was too messed up to give her passion, she needed it wanted had to have it, and she couldn’t be stopped. She finally reached Christians door and was welcomed with open arms, he was always the most welcoming of lovers, he loved to answer the door naked and his tanned blond, toned, and muscular body was shining. His body was almost blinding to her. No words were exchanged between them, there was just a look, a yearning, a need. That’s when he grabbed her by the back of the neck, and passionately kissed her. She knew she was his, and that’s where she longed to be, in his arms and away from Mr. Buzzard.

Meanwhile Mr. Buzzard was making himself breakfast, it was always the same every day, God he hated Sylvia…she was a lazy, nasty bitch. Why was he still with her he thought, she was lucky to have a great looking guy like himself. He went to go look in the mirror and thought to himself; God I’m Hot, what woman wouldn’t want me? They’d kiss the ground that they walk on, to have someone as hot as me in their lives. Then he made a kissing gesture at himself, and walked into his kitchen in his boxers, to make himself some breakfast. He was a horrible cook, who couldn’t handle a frying pan, but he knew how to make an egg. It was the only form of food that he didn’t burn.

Then a flash back hit him as he was standing there scrambling his eggs. He was in Afghanistan, there was a group of soldiers next to his military vehicle. The squad he was with was headed back home when it happened. All of a sudden, a bomb, from a rocket-launcher hit the soldiers standing next to his vehicle. No one had any time to hide or hit the ground! The bomb exploded the group of men he had seen standing there. He was hit! Hit with one of the victims of the bombings entrails, and it was all over him, and he started screaming! He was actually screaming in the kitchen. That was when he caught himself, screaming, he calmed himself down and started looking for his medicine. He hated the flashbacks; he hated what a mental midget he had become. Life was on longer the same, he was this guy, that women couldn’t stop staring at, but who had this horrible secret…that wouldn’t go away, couldn’t go away! He was damaged goods, a wasted life.

He was about to sit down in front of the T.V. to watch his favorite show to try to calm himself down, he was amazed by what he found after the war in America. How useless he thought all the programing really was. Puppets, puppets he thought to himself, everyone is an American puppet. He started thinking of his mother, the mother he loved but only new till he was 7. Why did she do it, it was a recurrent theme in his mind…one day for no reason, she took all her clothes off walked into the sea and drowned herself. No one at that time or now could ever explain why she didn’t love him enough to keep herself alive. Someone who was walking along the shore found her lifeless, naked body, as they were walking. He always remembered the way she smelled even now, like lavender, she smelled like lavender and he gently smiled to himself, he rarely smiled any more since the war. He rarely felt any type of emotions anymore that weren’t connected with pain.

Silvia was so satisfied there were no words for the satisfaction, from what she had done. She hated her mentally broken husband! She despised him, he was a good-looking asshole! Everyone who was in her life knew it too. Everyone tried warning her, that he was no good. She never listened to advice, never had and never would. He was the ultimate bad boy, Mr. Buzzard had been before he left for the military…that’s when she still loved him, yearned for his touch, desired him, and fantasized about him. All that had changed, he was older now, and more mentally damaged then anyone she knew. She could have looked past all that, if he just wouldn’t have become so violent, and angry after the war. At that moment she felt a certain amount of contentment from her sexual encounter with Christian. Something that she had never experienced, since Mr. Buzzard had gotten back from Afghanistan.

When she got home Mr. Buzzard was asleep per usual, nothing woke him up when he was on his meds and she was happy about that. That was when his mouth was quit, he wasn’t yelling or screaming, about the war or at her. She was contented in knowing he was content and asleep. All wasn’t well, but she was trying to make the best out an obviously bad situation. She was cooking dinner in the kitchen and he was standing behind her, he was smiling. It was great that he was smiling, he rarely experienced happy moments she thought to herself. How was your day? Oh I slept and dreamt, like I usually do. He grabbed her and kissed her hard. You know baby if you were to ever cheat on me; I don’t know what I would do? She tried keeping calm, did he know, had he found something somewhere that said something, a number, a hair, something? Had he followed her, and now he was planning on taking her out to the woods, to kill her? She didn’t know but she had to remain cool, she didn’t want to give up Christian...she needed him and had to have him in her life.
To be continued.